Back to La Paz 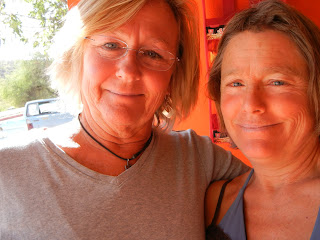 We took the mountain road back to La Paz.
Stopped in a beautiful village on the way and
had shrimp tacos.  Very good! We were of course
the only folks in the restaurant and she made us
a wonderful meal. This is us with happy thoughts
and full bellies.
The scenery was beautiful and we tried to get
to Cabo Pulmo to check it out. It is also one of
the marine sanctuaries on the Pacific side.  We
had no map so we were winging it.  We finally
found the road to Cabo Pulmo.  It was dirt and
it was probably an  hour to the town then back 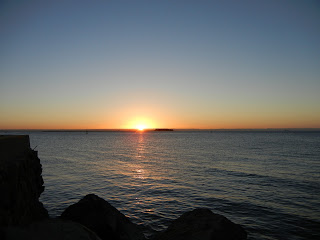 to the highway.  Unfortunately we elected to 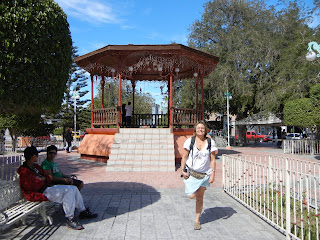 continue on to
La Paz to arrive just at or before sunset.
We made it just in time and relaxed with a
glass of wine and watched her set.  JASDIP!
In the next couple of days we did a great
deal of touring La Paz, tasting great coffee,
tasting great food and a lot of procuring for
our trip to the Islands.
We practiced our Spanish.  Actually Lisa is very
good at it and a few more months and she would be
speaking like a native.
We wandered down to El Centro and said a prayer for Mom and all of out lost and still living
relatives (Mother would be happy) at the
Cathedral.  Hopped across the street and
sang in the Gazebo in the Square.  Did you know
that if you stand right in the center of the Gazebo
and it is built correctly the acoustics are GREAT!
We also went to the local big Mercado.
Mercado Bravo.  It is a great place to get
seafood produce and a great lunch for
not much money. We had a delicious chili
rellano and some tamarind juice. Never had it
before .  Pretty good. The vender's at the Market 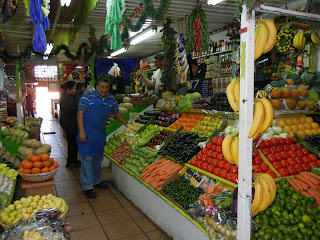 take such pride in displaying their wares.  It is akin
to art work in  my opinion. We wandered, admiring
all the stalls. 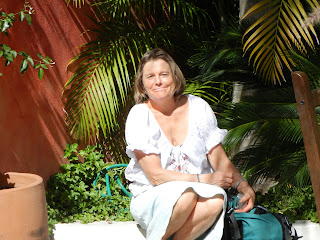 I think it was Saturday so we went to find the
Saturday Organic Farmers Market. We
succeeded and procured more great food
for our voyage. It was across the street from one
of my favorite dining places.
El Corazone!  We stopped just to see the
courtyard and say hi to Vespar, one of the
fine waiters at the place.


I think the sign says "The unassuming (or happy) Heart
has room for everyone". 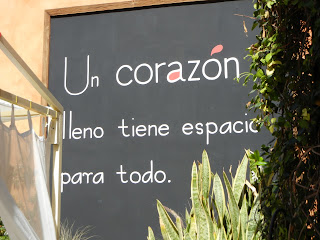 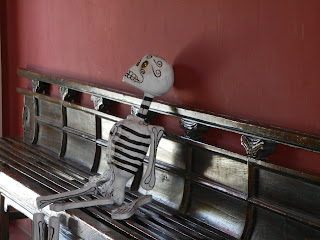 However there may be times when it is
hard to get a seat there.
Apparently this fellow had to wait a bit
too long in the waiting room. 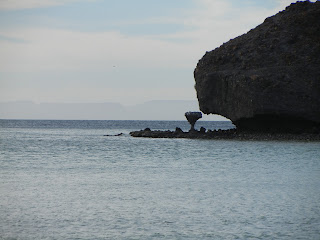 We had been trying to get to Ballandra Beach
before sunset for a couple of days and
we just couldn't seem to make it. However we
finally did.  Close though and the clouds
were lurking so the beach wasn't quite as
colorful as it can be.  It was also a bit cold. Nevertheless it was still a fantastic
place.  This balancing rock has always
been a landmark for the area. A few years
ago they actually cemented it because they saw that  it was not going to be around for much longer if they didn't. While walking on the beach I saw
this white blotch on the rock from
a distance and thought someone had
been painting on the rocks but on
closer inspection it was a paper mache mask
that someone had placed on the rock.
Very artistic.
Lisa, being from Oregon, hardly ever got cold.
I on the other hand, was always cold
those first few days she was here. 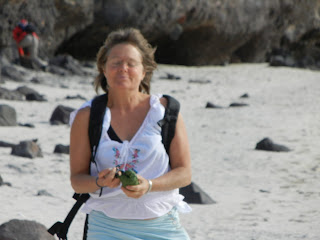 It doesn't take long to get acclimatized
to this warmth.  We wandered around the
whole bay. We spied (according to Lisa)
some oyster catchers. Lots of rocks and shells.
I swear she never did meet
a shell or a rock that she didn't want
to take home with her.  She plans to
put them into her gardens around the
house and some of then will probably
wind up in her rock steps for the back
porch that she is starting to build. 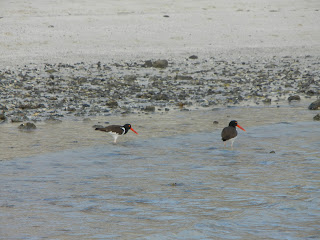 Oyster catchers.  Pretty cute. Guess I
should have blown them up. Too late now. 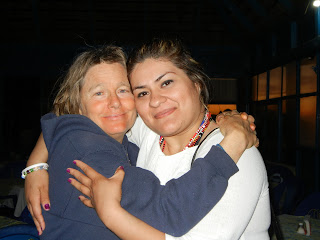 While on the beach we met these two
"kids".  Both engineers in electrical and
computer science, who were visiting from
Guadalajara for the weekend.  Very nice folks
and we told them we were headed
to Tecolote for some Chocolate Clams and
a drink.  They asked if they could tag along
and we had a great visit in the restaurant along with
the food.  Turns out that this woman, Carla,
had to push and push to get to go to
school for her engineering degree. Of course her
mother was proud after the fact but
now Carla says she is being pushed to get 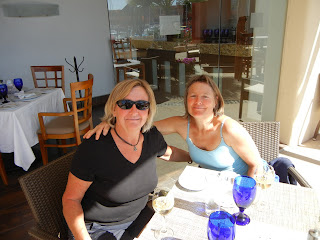 married and have kids.  She just doesn't
want that for herself right now. I told her I
had no kids and now no husband and
that you can take care of yourself and
have a very full life as long as you are
doing what you want to do.  She says she will go
home fortified in the knowledge that she really
isn't the only one and that it can be done.  It
must have been very hard in here culture to do the
things she has already done and to continue
doing those things that she want's to do.  I wish
her the best of luck, She has what it takes that's
for sure! 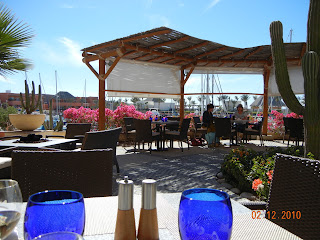 The next day was a trip to Costa Baja Marina.
I have been wanting to get out there for a
long time and since I had a rental car We took advantage of it.  We checked out the marina and
I got some info about the summer situation.
Then of course we were thirsty and hungry
and we passed this lovely Italian waterside
cafe.  They had great wine and pretty good
Pizza.  We both  liked the wine and the
atmosphere. 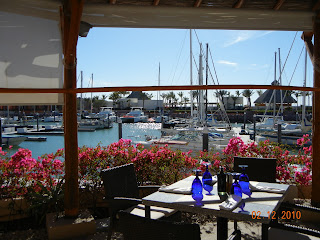 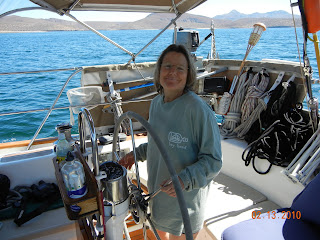 Well finally it was Monday and the
weather was fully cooperating so we set sail.
It was JASDIP!  Headed over to
Caleta Partida.  A lovely bay right between
Ilsa Ispiritu Santos and Partida.  The first thing
Lisa did was hop in the Kayak and take a spin.
I had a few chores to do and only one
Kayak so I proceeded to get the dinghy and
motor down for our road trips.
It was a beautiful place, great company, great weather, good food and good wine.  What's not to like? 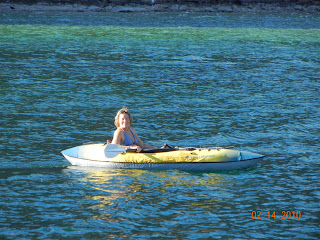