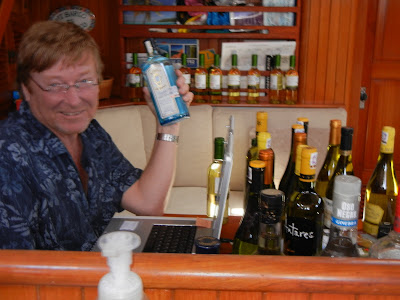 Well David Foy decided to come
for a visit.  First thing we had to do
was provision. Anyone who knows David knows he likes his wine.
In retrospect I should have given
him the Boxed Vino Blanca Seca.
It is not too bad if it is real cold.
Of course everything is an adventure
including shopping.
We decided to wander in town
and play tourist. It was really just
a ruse.  We did however see
this great little hotel in the
middle of town.  Very cute and
lots of things collected and hanging
around. I think it is 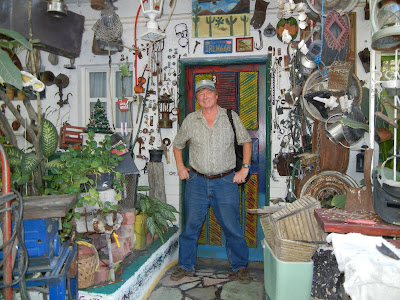 not very pricey
and is in the
center of it all. If one likes
to be in the center.
I for one look for fairly
quiet,white sandy beaches and clear,
clear water.  David however
likes the people and the Night
Life.  It was a pity.  There was
no festival or carnival going on
so there isn't much night life and
very little live music.  I do
confess that he tried.  His efforts were
no less than heroic. Alas he was stuck with Moi.
During our 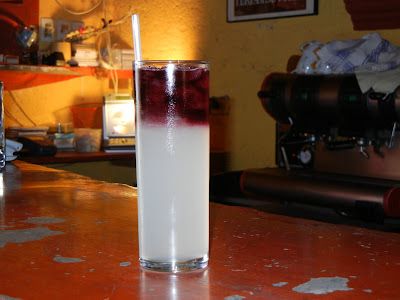 tourist time Dave was
also trying to find the perfect sangria.
This one was pretty but not
very effective.
I think we wandered around and then
decided to go out to eat.  Dave took
us to El Patron. I had never been there
and the food was supposed to be
very good.  The Martini's were good and the wine was excellent.
The place got Five stars for location, setting and view.  My fish was
Pargo and it was pretty good.
Time to head home.  I am an
early bird and Dave a night owl. We did well.  We both tried to adjust our sleep habits 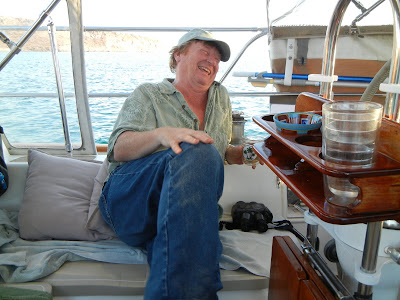 as much as we could.
Headed out in the boat not
planning to go anywhere but out for
a bit and wound up going to
Bahia San Gabriel on Isla Ispiratu
Santos.  Didn't have a dinghy cause
we weren't planning this but it turned
out to be quite a bonus.
It was very pretty and close to
La Paz .  There was a Frigate
rookery on the island and the babies
had hatched a bit ago so the
birds were a bit territorial. I blew up
my kayak and took a trip to get a
closer look.  Very cool.
It was a nice trip and we stayed two
days then headed home. I think we actually might have sailed a bit.
When we returned Dave took
me to a place I had been wanting
to go. It was sort of a Birthday dinner
I think. It was Italian (in Mexico) and they even had sushi as an appetizer!
Amazing! Anyway we tried the sushi and it was great but the best thing was
the buffalo (besides the whine of
course...it was yummy).  The chef and
his staff do a great job and one is treated like a queen or king.  The
piano player was also very, very
good.  Well we had a good time
and actually made it for the whole
week without killing each other..  Then fare well to Mr Foy.
Perhaps he will bring Manana
to Mexico someday! It sure is
nice!!
Posted by Crit at 9:45 PM