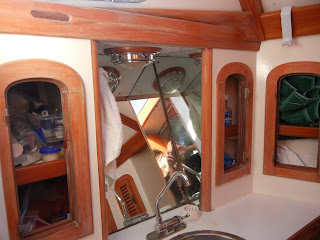 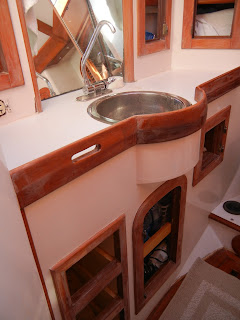 Well I have finally finished sanding and then (yes Danno I taped before I varnished) taping  and have since put one coat of varnish on the bathroom (port side).  I have also put 2 coats on all the doors.  It has taken me a while cause it takes a bit longer to dry
and I am still attempting to master the "floating a coat" thing.
It is looking pretty good however.
While I was varnishing Sergio came by with my new ladder.
This is a safety thing (as well as a beautiful piece of art) so if I fall off the boat and no one else is on board I can deploy this ladder from the water!!! It is a thing of beauty
and piece of mind.
All that took a couple of days and then I struck out
on foot to get cash and see a bit more of La
Paz.  I walked and walked and decided I was hungry so I stopped at the "Kiwi" place and sat by the
water and had a Bloody Mary and Eggs
Benedict ala Mexican Style. It was really pretty
tasty.  There was the poached eggs, the sauce,
the ham but it was all on a very delicious
toasted bagel.  I am still trying to find the
bread store and the bagel store early enough
in the day so that they are still opened.
It is very peculiar how everyone tells you
where someplace is by landmarks with
an occasional street name interspersed.
Like "the restaurant has a pink awning and
if you are standing facing the "flying cow" (that is another story all by itself) take a
left for three streets then right 1/2 block and
it will be on your right between a fettatarria (hardware) and the Modelerama".  I guess it is
partly because there are no street signs. Being someone who just wants the address with no landmarks it has quite the adjustment for me.
There is another thing.  The Kiwi place for example. I don't now it's real name but I think it is owned by some Australians so hence the name.
Takes a bit of getting used to.

So here is a photo of a beautiful Sunrise
lest you all think I only watch it set.  I am
up early quite frequently.  It is a time for the
internet.  It is hard to be inside when the
Sun is shining so while it is still dark and cool
it is a great time to attempt to catch up. The sunrises seem equally as beautiful as the
Sunsets.

Jasdip's Christmas Tree has a new addition
this year.  The Pancho Villa Topper.He was a gift from Doug and Carla.  It is
actually a bell and it has a dual purpose.
After the holidays I will be using it to
summon "the help" aboard Jasdip. (Don't
I wish!)
Then there was the Christmas Party at Casa
Ana.  Wow!  That was the BEST!!!
I have never seen such a feast!  There were
millions of homemade tamales, chili, dips,
homemade bread, cheeses, rice and countless
other delights.  Then there were the desserts!
So many tastes.....so little room.
A good time was had by all and everyone
finally left Casa Ana so they could get some rest.
It has been a wonderful Christmas.  This year
was a FRIEND Christmas or at least some FRIENDS.  Hopefully the next holidays will be
spent with other FRIENDS and FAMILY! 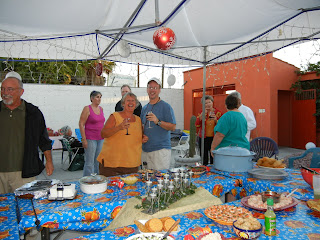 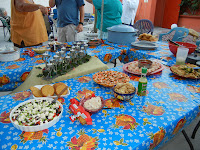 Missing all of
you guys that
weren't here
but wishing you
a Very Merry and Prosperous
New Year!!!